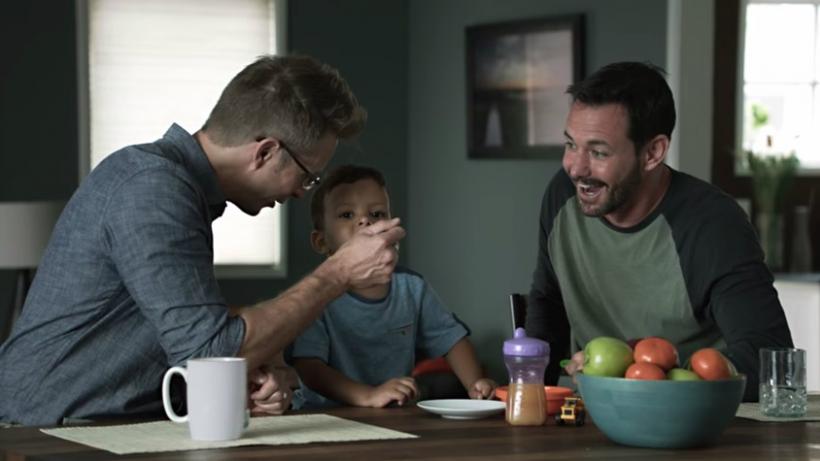 In the past decade, companies, celebrities, television networks, etc. have begun to cash in on gearing their ads toward minorities as well as making them more “diverse.” Some of these companies benefit from such ads, while others have missed the mark and have received serious public backlash. As this new era of advertisements is being tested with the public, the fine line between being inclusive and offensive is often breached.

Campbell’s Soup recently launched a new heartfelt ad campaign with the message; “Made for real, real life.” One of their televised ads features Larry Sullivan, David Monahan, and their son Cooper. In the clip, Sullivan and Monahan take turns feeding spoonfuls of Star Wars themed Campbell’s soup to their son Cooper while reciting famous lines from the iconic movie. According to Campbell’s vice president of marketing activation, Yin Woon Rani, the idea behind the ad campaign is to show how Campbell’s products “fit into people’s hectic everyday lives in an authentic, humorous and relatable way.” This campaign relates to the modern day American family by showing them that the brand understands the joys and obstacles of everyday life. Advertisements like this are needed in order for children with gay parents to feel like they are just like any other family.

In addition to the large amounts of positive feedback concerning the ad campaign, there were equal amounts of people who were offended by the advertisement, dubbing it “unchristian” and “prohomosexual.” Despite receiving copious amounts of negative backlash and promises to boycott the soup company, Campbell’s stood by their decision to run the advertisement. 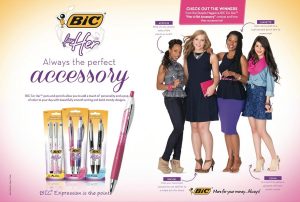 While there have been many recent controversies surrounding advertisements and the LBGTQ community, there has also been a spark in products and advertisements directed toward women. One company in particular received very low approval ratings of their new product designed just for women. BIC pens recently launched their new product called “BIC for her.” The pens feature an “elegant design- just for her” and a “thin barrel to fit a women’s hand.” The pens are also available in an array of pastel colors such as lavender and pink. Amazon shoppers were quick to leave reviews mocking and ridiculing the misogynistic concept of the new product. One sarcastic reviewer stated; “AT LAST! Bic, the great liberator, has released a womanly pen that my gentle baby hands can use without fear of unlady-like callouses and bruises. Thank you, Bic!” In addition to the belittling concept of the pens, they are priced almost twice as high as the “normal” pens that BIC produces.

Perhaps the biggest mistake that the pen company made in their attempt to market these pens was asking iconic feminist comedian Ellen DeGeneres to be their spokesperson. Ellen was not only “outraged” at their request, but she even satirized the company’s decision to make such a senseless product on an episode of her popular talk show. She even went as far as to create a spoof commercial for the lady pens that has reached nearly 7 million views on YouTube. This marketing disaster is just one of many campaigns that has aimed to empower women and has only done the opposite.

One of the most prominent issues in the media today is being racially inclusive. It is no secret that African Americans and other minorities don’t appear in as many commercials and print advertisements as white people do. Additionally, when African Americans are featured in ad campaigns, the ads are often centered on stereotypical messages and products.

For example, KFC was recently under fire for an ad in which the racial stereotypes are evoked. The ad shows a black woman leading a young black girl around the streets of Thailand. She drops the little girl off at an International school where she is the only black child. The girl is clearly feeling like an outcast and is even shown pointing to South Africa on a map for her classmates to see. One of her Asian classmates takes pity on her and begins to lick her fingers hinting at KFC. The little girl’s face lights up as she realizes what her classmate is saying. The next scene shows the little girl happily eating fried chicken amongst her Asian peers. This is an example of a company playing on racial stereotypes for economic gain. 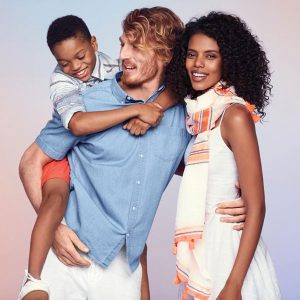 While some companies use racial stereotypes in their campaigns, some are aspire to use racial diversity in a more positive and inclusive way. A modest ad for Old Navy stores sparked an outburst of disapproval from bigots and white supremacists. The ad released via twitter, shows a happy interracial family hugging. The dad appears to be Caucasian and the son and mother are African American. The lighthearted advertisement instantaneously received harsh criticism. Hashtags such as #BoycottOldNavy and #WhiteGenocide were used when referring to the family-oriented ad. However, despite the intense negative feedback that the campaign received, the ad also sparked numerous responses of appreciation. People began posting photos of their own interracial families often including the hashtag #LoveWins. Despite backlash, Old Navy refused to pull the ad. Debbie Felix, a spokeswoman for the clothing chain stated; “We are a brand with a proud history of championing diversity and inclusion. At old Navy, everyone is welcome.” This ad also evoked a comment from prominent political figure John McCain’s son, Jack McCain. Jack McCain posted a photo of himself with his African American wife, Renee Swift chastising anyone who was in opposition to the advertisement.

In situations like this one it is easier to jump to criticism than to stand by the positive portrayal of diversity and solidarity. The importance of companies running ads rooted in diversity is growing as interracial families become more and more prevalent in the current society. There is no reason that children that come from interracial couples should feel as if they are less than normal, and representing them in something as simple as a clothing ad helps to do so.

The recurring Internet chatter surrounding any advertisement that puts the spotlight on minorities, women, or the LBGTQ community is exactly what these companies are aiming for. We are still in a time of transition. These brands that are brave enough to incorporate diversity and the LBGTQ community into their campaigns are ultimately coming out on top. There is a growing openness to diversity as millennials reach parenthood. The composition of the American family is rapidly changing. There are now more single mothers, same-sex parents, and interracial families than ever before.

The media shapes the image of diversity, therefore, there needs to be more diverse individuals in positions of power in the media industry. Having the right people creating these messages is crucial in preventing missteps and offensive cultural portrayals. The positivity of multicultural marketing can quickly be retracted when advertisements lack authenticity and sincerity.