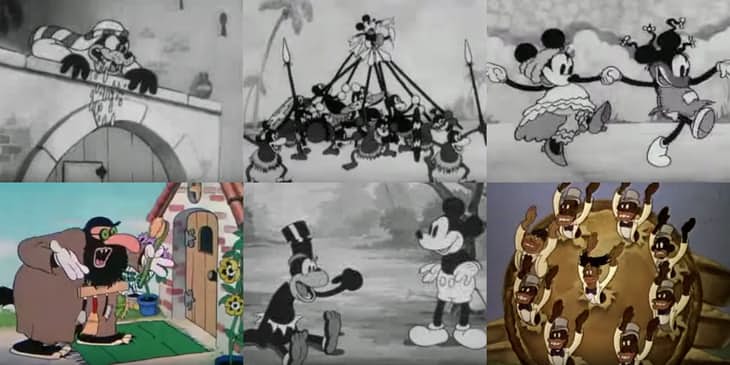 Disney is one the America’s most beloved brands. Grown adults get in passionate debates about which animated film from their childhood is best. People hoard the VHS for the nostalgia it brings. Disney Channel shows like Lizzy McGuire, Even Stevens, The Suite Life of Zach and Cody, and many more are still loved by the kids who grew up with them. Disney has been a prominent brand in America for a long time: since 1923, in fact. Since it’s been around for so long, some of their older products certainly reflect the opinions of their times. While there is still plenty of progress to be made, Disney’s recent commitment to inclusion has been a step in the right direction. But to know how to move forward, we have to know what was did wrong.

In the 1930s, Disney produced many short animations while they were in production for their first feature-length animated film: Snow White and the Seven Dwarfs. The shorts that they produced in the meantime, though, were essentially racist per diem. They were so blatantly racist that there is no better proof than me just showing you them. The shorts in question are Trader Mickey, Mickey in Arabia, Mickey’s Mellerdrammer, Mickey’s Man Friday and The Three Little Pigs. 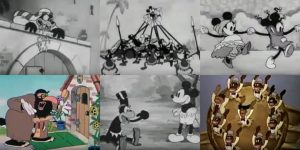 These shorts were, of course, products of their time. They feature blatant racial stereotypes and references to the disgraced entertainment of minstrel theatre. Minstrel theatre, as seen in Mickey’s Mellerdrammer, was the popular entertainment of African American exaggerated stereotypes on stage, often played by white people in blackface. Even the title of the short makes fun of “negro” speech patterns by changing the correct “melodrama” to “mellerdrammer”. These instances of blackface portrayed black people as extremely simple but often mischievous; lazy; gluttonous; having huge, overdone lips and deep black skin. It was, by today’s standard, obviously extremely racist. To see a beloved character like Mickey to happily participate is uncomfortable, but it’s important to acknowledge. Otherwise we as a society would never be able to improve.

The other shorts created in this time were strongly problematic as well. Mickey in Arabia, for example, shows a greedy, drooling sultan-type figure kidnapping Minnie Mouse to force her to kiss him. Trader Mickey shows dark-skinned natives as uneducated, cannibalistic savages. And even in The Three Little Pigs, the most well-known of these shorts, shows an obviously “Jewish” salesman. All of these shorts, at the time, were fairly popular and completely socially acceptable. Why is that?

This is mainly due to structural (or societal) racism. Structural racism is a term put on the socially acceptable but racist behaviors in a society. This is how societies’ attitudes and ideals come together to discriminate against minorities. These behaviors change throughout the years, and that’s why these cartoons are considered offensive today. But at the time, these stereotypes were not only okay, but they were entertaining. Mickey was assumed to be a “white” character, even though he is not even human. He was made to be the relatable main character in a sea of quirky colored characters.

So why is this different from general representation? The stereotypes of minstrel theatre, Jewish salesmen, dark-skinned savages, and kidnapping sultans are degrading caricatures that paint entire groups of people as simple or evil. This is simply not representation. They are not accurate or even positive depictions of real people, and such illustrations makes is easier for those in power to dehumanize them.

Disappearance of Song of the South 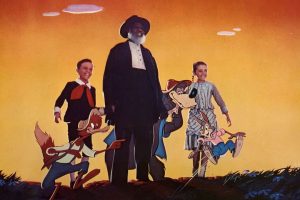 Another piece of embarrassing Disney history comes in the form of Song of the South. Song of the South was released in 1946, and was based on the “Uncle Remus” stories. It was a feature film about a white child named Johnny who after moving to a Georgia plantation with his mother, is distraught until he means nearby Uncle Remus. Uncle Remus is a former slave who still lives happily on the property and remains subservient to the white family living there. He befriends the children and tells them stories, but the movie does a bad job of hiding the obviously racist post-Civil War tones. Walt Disney himself expected the film to be a box office smash, but even in 1949 people had objections. In a preview screening in Atlanta, one crowd reacted so adversely Walt Disney actually left the theater.

The film and how it was received, as media often is, was a direct reflection of racial tensions in America at the time. The actor who played Uncle Remus, James Baskett, was awarded an “honorary” Oscar. He was not eligible for a legitimate Oscar, nor was he allowed to attend the awards show because he was black. The film began to stand for the American attitude that white people were fine with using black people when convenient, but still did not want to acknowledge them as equal.

Critics described Uncle Remus as the “dream African-American” citizen; polite, subservient, kind, kept out of the way and never fought back, even when he was wrongfully blamed. And it is that writing that distinguishes Uncle Remus as a racist interpretation from a positive one. Even though it was a welcome change from the 1930s cartoons, Uncle Remus stood for the simple, happy slave narrative. It set an unrealistic standard that white people wished other black people could adhere to.

So why did Uncle Remus’ actor, James Baskett, go along with it? Part of it could be attributed to assimilation. The sociological phenomenon of assimilation refers to minorities having to lay low or play along with the majority’s opinions to successfully function in society. As a black actor in Hollywood, there weren’t many roles available to begin with. Even fewer were positive, non-villainous roles. Baskett had to take some problematic roles simply to survive in the industry.

Nowadays, the film is seen as one of Disney’s largest embarrassments. It hasn’t been released from the Disney “vault” in over 25 years. Virtually the entire Song of the South legacy lies in two things: the award-winning song “Zip-a-Dee-Doo-Dah”, and the cartoon characters on Splash Mountain. Even then, Splash Mountain has been altered so severely, it holds very little resemblance to the actual film; just to the cartoon characters it featured. Nowadays, Song of the South is an example of suppression of past prejudices.

Today, Disney is generally seen as a beloved, progressive brand. And even though it has had a few slip ups in recent years, it has made aggressive efforts to correct them. For example, Aladdin’s opening song featured the lyric: “Where they cut off your ear if they don’t like your face. It’s barbaric but her, it’s home!” After objections for Arab-Americans, Disney quickly changed the lyric and apologized. It cannot be found in film releases today. Disney continues to work towards inclusion and fairness to all people, but I’d argue that erasure is not always the best way to deal with past mistakes. Its a fine like to walk. Pieces like Song of the South and the 1930s cartoons cannot be fixed with a simple rewrite. They cannot be dubbed over with new dialogue. They are too broken. The fact that they have been taken out of circulation is adept; Disney should not profit from them. But in the future, when Disney makes mistakes, it needs to keep in mind that pretending it never happened is not the answer. Warner Brothers, for example, puts the following disclaimer in front of many of their older cartoons: “The cartoons you are about to see are products of their time. They may depict some of the ethnic and racial prejudices that were commonplace in American society. These depictions were wrong then and are wrong today. While the following does not represent the Warner Bros. view of today’s society, these cartoons are being presented as they were originally created, because to do otherwise would be the same as claiming these prejudices never existed.” In summary, there is still much work to be done in the media. The rules of what is acceptable and unacceptable are constantly being set and rewritten, and it is important for companies to try and stay on top of it. After all, we have to acknowledge the problems in our past to keep them out of the future.