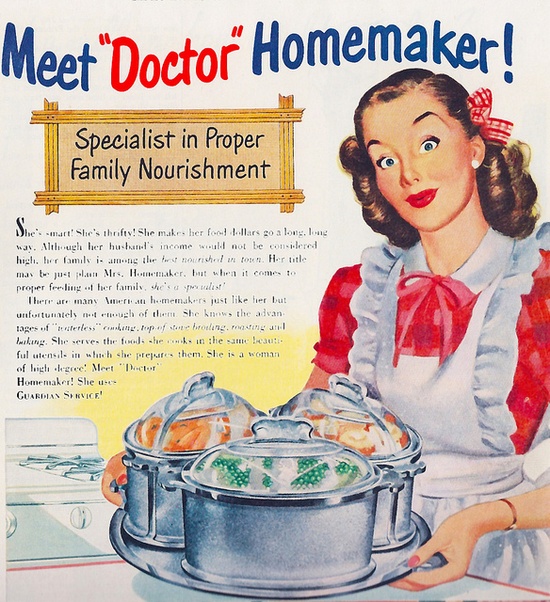 The imposition of unrealistic gender roles has been ingrained in the media since before the television was invented. When most people think of the classic 1950’s American housewife, perfect hair, cooking dinner wearing pearls, cleaning, and waiting for her hardworking husband to return from work comes to mind. The media plays a significant role in how stereotypes are formed. People tend to use the media as a standard for how they view themselves as well as the world around them. This becomes problematic when it comes to understanding the extremely complex concept of gender. These messages seep deeply into the unconscious and help create the image people have of themselves and others. Advertisers understand that if their campaigns capitalize on the idea that people need what they are selling in order to be who they think they should be in terms of gender and other areas, their products will sell. It is this practice that capitalizes on and furthers gender stereotypes. The imposition of gender roles often promotes hegemonic masculinity, which is defined as the current configuration of practice that legitimizes men’s dominant position in society and justifies the subordination of women, and other marginalized ways of being a man. Another way that the media denounces female empowerment is through advertisements centered on “male gaze.” Male gaze is the way in which the media and literature depict the world and women from a masculine point of view, displaying women as objects of male pleasure. 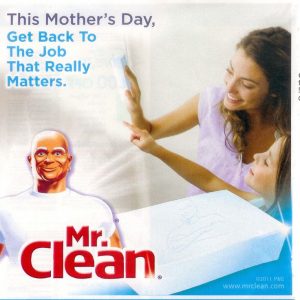 In 2011, Mr. Clean released a special mother’s day ad picturing a little girl and her mother happily cleaning a shower door. The text on the ad reads; “This Mother’s Day, Get Back To The Job That Really Matters.” Even on a day that is supposed to be celebrating motherhood, this advertisement reinforces dated stereotypes that in this day and age, companies should be shying away from. The advertisement also insinuates that all women, regardless of age, should know how to properly clean. Mr. Clean is far from the only cleaning product company that is using their advertisements to enforce gender roles. Countless other household companies seldom have men in their advertisements. 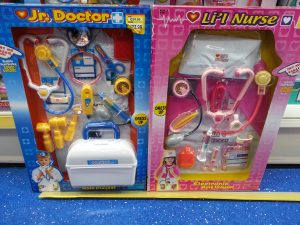 It seems ridiculous that something as innocent as children’s toys could contribute to the idea of male dominance, however recently toys have become more gender specific. One toy in particular has received a lot of criticism. The toy comes in two versions, one for girls, and one for boys. The toy set intended for little girls comes in pink packaging with the label “Li’l Nurse,” while the boy’s toy set is packaged in blue with the label “Doctor Jr.” The packaging goes as far as to put a picture of a little girl and a picture of a little boy on the respective toy. Even children are aware that the doctor is in charge and the nurse is supposed to follow the doctor’s orders. The recommended age to play with these toys is two years old. This means that even as young as two, little girls are being told that they can’t do the same things that boys can do. Toys, especially ones that reflect roles in the professional world, should be left gender neutral. Children should be able to decide if they want to be doctors or nurses, society shouldn’t choose for them. The gender division of toys reflects the gender divisions that our society imposes constantly in everyday life. 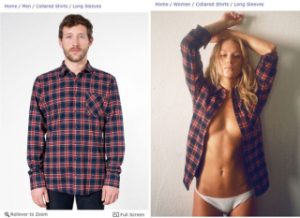 Whether it’s on a billboard, TV commercial, magazine Ad, social media ad, etc., we rarely go a day without seeing a half-naked woman being used in an advertisement. Companies often use male gaze to sell products and services. However, the woman being used to sell the product becomes what is being bought and sold. Even advertisements that are directed at women are not exempt from the idea that “sex sells.” Women are encouraged to buy the product in order to become more like the model in the advertisement. They are convinced that if they purchase this product that they too can receive male attention. Girls of all ages are experiencing depression, low self-esteem, and anxiety about their appearance. Additionally, exposing young boys to the objectification of women endangers the possibility of them being able to maintain healthy intimate relationships in the future. Clothing brands are arguably the biggest offenders of the exploitation of women in their advertisements. American Apparel in particular has notoriously used women’s sexuality to sell their clothes. Clothing items that are marked as “unisex” do not advertise the clothing in the same way when they are being worn by a male model vs. a female model. The photos chosen for the female model are often hypersexual and revealing, while the male model is fully clothed. The themes and messages that a clothing company as renowned as American Apparel is putting out, are negatively impacting our society and contributing to the idea of male dominance.

The advertising world is far from making any significant progress toward the abolishment of objectifying women, however, a feminine product company shook America with their 2014 Super Bowl ad. Always launched a campaign aiming to stop the drop in confidence that girls experience at the start of puberty and encourage them to keep playing sports #LikeAGirl. Studies have shown that nearly half of the girls who play sports quit when they reach puberty due to lack of confidence and trying to conform to societal expectations. Historically, feminine care products have featured supermodels gleefully dancing around in the midst of her period. Always shattered these unrealistic depictions and replaced them with an empowering message during the most watched television program of the year. Not to mention, this was the first time that a feminine product commercial was run during the Super Bowl. Advertisers should follow this example and reject the skewed gender norms of the past.

Advertisers have a profound influence on the expectations and perceptions that people have of themselves in terms of their gender. By perpetuating gender stereotypes and promoting male gaze, advertisers create perceived limitations, both socially and professionally. Formulaic ads present a one-dimensional picture of men and women and discount the diverse nature of human beings regardless of gender. The world has moved beyond archaic gender definitions, and in many cases, the media desperately needs to evolve.