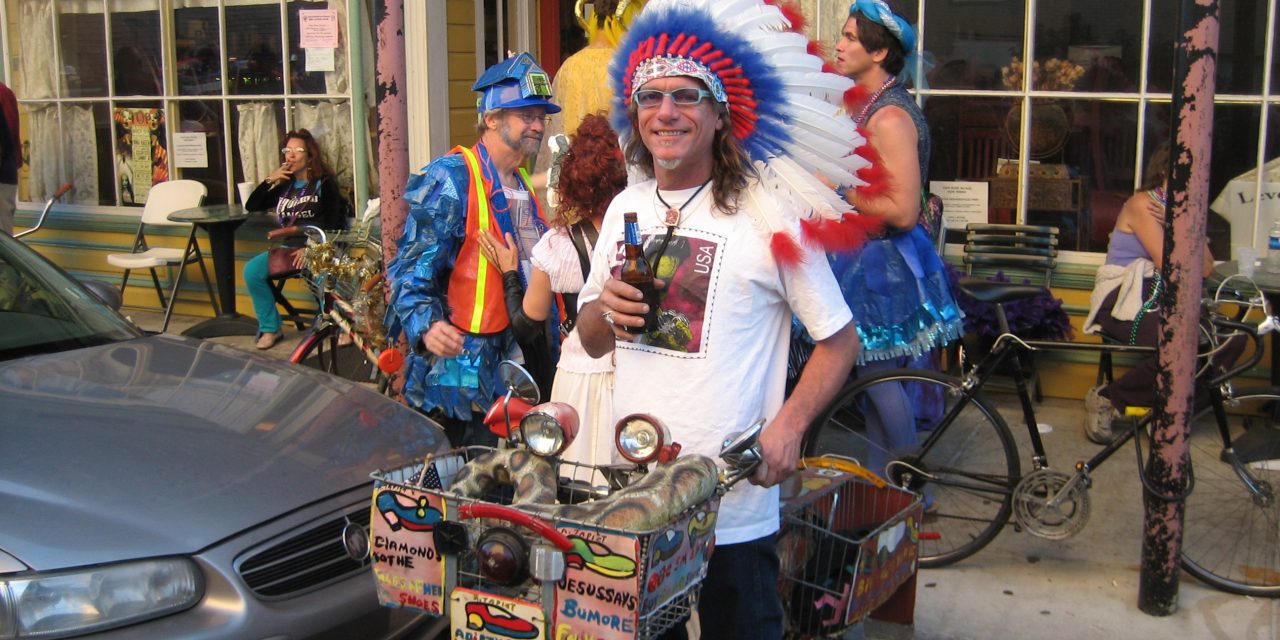 According to Unsettling America, “Cultural appropriation is the adoption or theft of icons, rituals, aesthetic standards, and behavior from one culture or subculture by another.” It is generally applicable to subjects of minority or lower status.

“This ‘appropriation’ often occurs without any real understanding of why the original culture took part in these activities or the meanings behind these activities, often converting culturally significant artifacts, practices, and beliefs into ‘meaningless’ pop-culture or giving them a significance that is completely different/less nuanced than they would originally have had.” –Unsettling America

When cultural appropriation occurs, cultural groups’ clothing and history is capitalized on to appear comical or fashionable for a moment. Meanwhile, the true symbolism of that group’s way of life gets lost in translation.

Examples of cultural appropriation can be seen throughout the media, including but not limited to, television commercials, music videos, print advertisements and fashion. 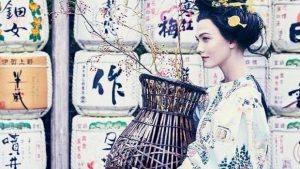 One case in recent news is Karlie Kloss’ Vogue photoshoot in which she portrayed a Japanese geisha and was dressed in what most people would assume to be a culturally inappropriate manner. According to Merriam-Webster, “A geisha is a Japanese girl or woman who is trained to provide entertaining and lighthearted company especially for a man or a group of men.” The above photo was included in the latest volume of Vogue, which was presented as its diversity issue. Kloss faced extreme criticism for her lack of respect for the geisha community by participating in this shoot as a white woman with no Japanese heritage.

Who is Karlie Kloss, and why was she chosen?

As stated on Vogue’s website, Karlie Kloss is a Caucasian American fashion model born in Chicago, Illinois and comes from German and Danish descent. Kloss has participated in advertising campaigns for major corporations such as Marc Jacobs, Calvin Klein, American Eagle and Adidas, but is most known for her experience as a Victoria’s Secret Angel from 2013-2015.

Because Kloss does not celebrate Japanese geisha culture in her everyday life, her participation in Vogue’s photoshoot was perceived as inappropriate and disrespectful by many readers. By having a famous white American model “play geisha” for a diversity photoshoot to make her appear ethnic, it is disrespectful to that culture she portrayed. Some Vogue readers resorted to Twitter to express their anger. 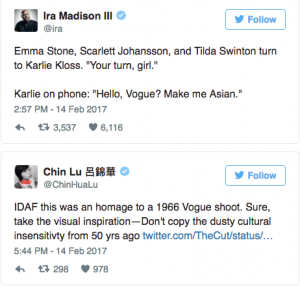 Unfortunately, Kloss is not the first celebrity to participate in appropriation of geisha culture. In 2013, Katy Perry performed a culturally controversial performance of her hit song “Dark Horse” at the American Music Awards. Perry formed in a costume of a modified kimono, tabi socks and a heavily powdered face, which sparked a debate about cultural appropriation in pop culture. 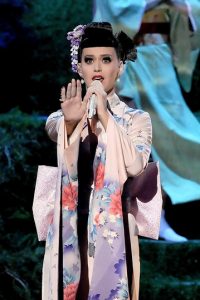 Because Perry and Kloss are both white females, they are automatically subject to white privilege. Both are successful in their professions and take advantage of their abilities to turn cultural outfits and behaviors into fashion statements. Celebrities like these can use their influence to change the way their fans view different cultures. According to the “On Racism and White Privilege” article from Moodle, “White privilege is a hidden and transparent preference that is often difficult to address. Only on closer inspection do we see how it creates a sense of entitlement, generates perks and advantages for white people and elevates our status in the world.”

Hopefully, pop culture performances and fashion magazines will soon embrace multiculturalism and stop celebrating cultural appropriation. According to the article “Colorblind Ideology is a Form of Racism,” multiculturalism is defined as, “an ideology that acknowledges, highlights, and celebrates ethnoracial differences. It recognizes that each tradition has something valuable to offer.”

Turning a new leaf from appropriation to appreciation: